This week it's all abortion caravan, all the time!

The "new abortion caravan" went to Winnipeg, they went to Sault Ste. Marie, they didn't go to Windsor but Windsor still protested them, and they went to London.

Special thanks to CAW for their strong pro-choice presence and for organizing a lot of these demos!

And for your entertainment, here is a sweet pic a friend of mine took in Milwaukee last week: 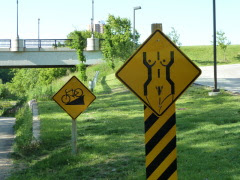 Posted by The Pedgehog at 7:16 AM No comments:

The "new abortion caravan" hit Regina this week, and then Winnipeg, causing a lot of criticism and disgust as per usual - some general thoughts and my take on it.

Disappointingly, the SOGC seems to have lost the plot, calling for a ban on "entertainment" ultrasounds.

Sex-selective abortion is a particular concern in Manitoba.

The Crown ends a bid to keep Linda Gibbons jailed.

What have you been reading about?
Posted by The Pedgehog at 7:16 AM No comments:

Steeling Ourselves for the "New Abortion Caravan"


So, as you may know, there is a group of people currently travelling across the country as part of what they call "the new abortion caravan", which is nothing more than a glorified GAP van trying to co-opt the history of grassroots feminist struggles.

If you are looking to protest/counter-rally against the caravan's presence in your town, the CAW has put together a very helpful list of organized counter-protests and contact information so you can get in touch and lend your support. The list is here and it covers Winnipeg, Thunder Bay, Sudbury, Brampton, London, Toronto, and Ottawa (if you have links to the event pages of any of these protests, send 'em my way!).

ARCC has put together some helpful tips (check them out!) on how to respond and what to include in your counter-protests. The grassroots responses to the caravan so far have focused on creativity and engaging/informing passersby about safe access to abortion, Motion 312, and healthy sexuality as a counterpoint to the gory and shaming images coming from the caravan.

Posted by The Pedgehog at 11:59 AM No comments:

More discussion on Mark Donnelly singing the anthem at an anti-choice rally.

The "New Abortion Caravan" is making its way across the country, gory fetus pics and all - to the horror of original Abortion Caravan activist Margo Dunn. Stephanie Grey is ridiculous as usual. More to come!

Linda Gibbons failed to make a compelling case as to why she should be allowed to harass women trying to access abortions in Toronto, and lost her appeal to the Supreme Court - which got a surprising amount of coverage. Maybe she will go to jail!

Oh and debate on Motion 312 has been deferred to September 18. Word on the street is that Harper is coming down pretty hard on the Tories to vote against it.

What have you been reading about?
Posted by The Pedgehog at 12:02 PM No comments:


Alright, here it is, all the things I've been reading since the last time I put one of these up. It's a lot of things!

First, some coverage of the March for Life from Canada.com, Metro, Xtra, and the New Brunswick one was on CBC!

Some further thoughts on Motion 312 from Joyce Arthur, Not Guilty (at Abortion Gang), and this MP who submitted pro-choice and anti-choice petitions. Also here's these cool folks. The vote is coming up!

Also don't worry, a lot of men still think you ladies should keep your legs closed! Maurice Vellacott believes it is possible to bully a fetus; Mike Murphy (who has been on my douchebag radar for a long time) would have a free vote on abortion; and Mark Donnelly sang the national anthem at an anti-abortion rally.

The social conservative stronghold in Alberta may be weakening.

Why sex-selective abortion is not a "gotcha!" for feminists.

What have you all been reading?

Posted by The Pedgehog at 10:45 AM No comments:

Black Out Speak Out 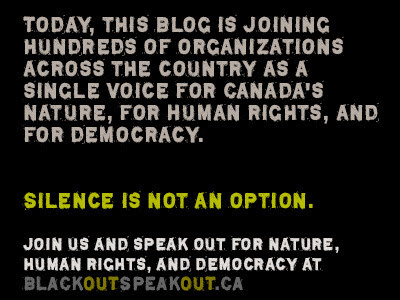 Posted by The Pedgehog at 11:23 AM No comments:


Apologies for my absence! I have been out of town the last three weekends because I am very rich and popular. I have also had a lot of stressful situations in my life that I'm sure I will blog to you all AT LENGTH, so prepare yourselves! I will also have a jumbo weekly reader this weekend. OMG.

Right now I just want to tell you about something that happened a couple weeks ago. I got an email from someone at the Sun "News" Network asking me to come on Michael Coren's show, The Arena, for a ten minute debate with him about whether there is a War on Women in Canada, and whether the abortion debate should be re-opened.

At first I thought I might take them up on it, because a. I like being on TV, and b. I could knock this out of the park. I watched some YouTube clips of Coren's show (I had never heard of him before and I was delighted to find out we don't even get Sun on our TV) and found him to be like some kind of right-wing Keith Olbermann - insufferably smug, contemptuous of his guests, and so far up himself he can probably see out his belly button. I can only imagine he is able to get people to pay attention to him because of his British accent.

Still, if the show was on any other network I might have considered it. I talked it over with a couple people though, and came to the conclusion that Sun just doesn't have a reachable audience. I would be on that show to be ridiculed and shouted down; even though I can handle it, there's not much point to go spout talking points to an audience who will never be convinced. No one watches the Colbert Report to make up their mind about something; we want to see stupid people be ridiculed. I'll happily be ridiculed if I think there's some hope of reaching people, but I've seen Sun TV. Smart people aren't watching that shit.

So I turned it down. And now I'm wondering if someone else took them up on the offer, and how they did. It was supposed to air last night, but as I said, I don't get Sun TV anymore so I couldn't watch it. I've been looking for it on the internet in vain. Anyway let me know if you come across it, because I'd love to see how they approached it.
Posted by The Pedgehog at 2:12 PM No comments: