Not abortion related per se, but if you are at all interested in feminism you need to get your hands on this new book edited by my hero Jessica Yee. And if you're in the Toronto area, please come join us for the launch this Friday! Details:
Pre-orders have started for a new CCPA book edited by Jessica Yee-- Feminism FOR REAL: Deconstructing the academic industrial complex of feminism.

Against a backdrop exposing a 500+ year legacy of colonization and oppression, Feminism FOR REAL explores what has led us to the existence of 'feminism', who gets to decide what it is, and why. It provides thoughtful, honest and unapologetic insight into how different communities; including Indigenous and women of colour, sex workers, disABLEd, queer, Two-Spirited and trans youth define and relate to feminism; what it means to them -- and more importantly, what it doesn't mean.

In the words of editor Jessica Yee, this is not a hate-on of feminism or of academia. It is about truth-telling. And, as explained in the introduction, in the process of uncovering truths, facing them head-on and seeing where they lead us, we can redefine feminism beyond a first, second, or third wave policed by academic institutions so that it becomes about truly cross-cultural human movements that are about real justice - and doesn't end up reinforcing the very forms of oppression it claims to confront.

Jessica Yee is a self-described "Two-Spirit multi-racial Indigenous hip hop feminist reproductive justice freedom fighter". She is the founder and Executive Director of the Native Youth Sexual Health Network (the only organization of its kind in North America) that works within the full spectrum of sexual and reproductive health by and for Indigenous youth across the continent. 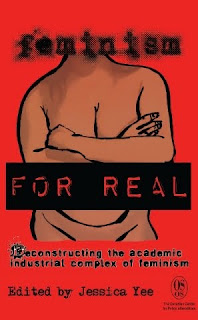 Posted by The Pedgehog at 10:57 AM No comments:

Hey everyone, are you sick of reading about my cervix? Here's some other stuff you might find interesting!
If you have a story to share about how Planned Parenthood has helped you, share it here (Canadians can participate too! What hurts our neighbours hurts us).
Fellow Canadian the Biebmeister weighed in on the abortion issue, and his opinion was actually not that surprising for a 16-year-old boy. What was this interviewer thinking??
A wonderfully written personal account of abortion.
A CPC in Ottawa defends its role.
A Canadian priest is suing the anti-choice site LifeSite for damaging his career and reputation.
More women are choosing the IUD (this article quotes doctors from BCBC, where I got my IUD put in!).
Feel free to share what you've been reading in comments.
Posted by The Pedgehog at 10:34 AM No comments:

Hi again friends. You'll be happy to know I am feeling much better today, and I actually kind of regret the decision to book the day off work, since I really could have been fine; not to mention I need the money. And I already took yesterday off - and called in sick on Tuesday because of a cold. Yeah, it hasn't really been my week.
Anyway, minimal cramping and bleeding, so that's good. I have received a lot of support and good wishes from the wonderful people in my life, which is very much appreciated. I also seem to have caught the confusingly ambivalent attention of Suzie Allcaps over at Big Blue Wave, so take that how you will. Thanks for the link love, Suzanne, and for pointing out that no, they in fact do not cover IUDs in sex ed. I wish they had. Just another reason we need comprehensive sex education, amirite?
I'm so glad I wrote about the experience right away, because even now it doesn't seem real. It couldn't have been THAT painful, right? It reminds me of my experience with tattoos: as soon as they start on it, I think, how could I have done this again?? It's HORRIBLE! (I told you I was a wimp). And I leave, and I think - I'm never doing this again. But now I think, there's a tattoo I really want...and it didn't hurt THAT much...I should get another one.
Yesterday I was ready to get up and walk out without the IUD if they would just stop, just take out the speculum and stop torturing me. But today I think, well, if it falls out, I'll be cool to get another one put in.
I'm an idiot.
Anyway, it hasn't fallen out (knock on wood).
The main thing I took away from this experience is that the personal truly is political. As soon as my partner came into the room, I said: "I'm not having babies." And I mean it. Ever. I knew that I didn't want to ever give birth, but this experience made it physically, viscerally real for me. I can. Not. Handle. The. Pain. I just can't. I am a soft soft lady, inside and out, and I'm ok with that. I have absolutely no interest in pushing a human being out of myself.
And the fact that there are people who don't want women to have that choice is so much more frightening to me today than it was on Wednesday. I don't know what childbirth is like, but if it's anything close to the pain I experienced yesterday (and I think it's probably worse), the thought of women having to do that without being 100%, totally, enthusiastically on board is sickening. I mean really. What. The. Fuck.
I have a lot of other thoughts, and they're coming soon, but that was the one that really stuck with me once the whole thing was over. And the commenters over at BBW can make all the smug judgments about my choices that they want, but I promise I am 100% more put off by their desire to control what goes on in the bodies of strangers than they are by my "potty mouth". Fuck you, fuck your oppressive, anti-woman bullshit you piece of shit fascist dickwads. How's that for potty mouth?
Seriously though, thanks for the support you guys.
Posted by The Pedgehog at 1:02 AM 2 comments:

I know I usually do these on Sundays, but you know how it is.
Lots of stuff to read this week:
The maternal health initiative is in the news again, and Harper was in Geneva to drum up support. Questions are still being raised about the efficacy of a maternal health plan that doesn't include access to safe abortion.
Summaries of abortion law and abortion access in Canada.
Antis are still moaning about not being allowed to harass women have anti-abortion clubs on campus.
Surprise! We have abortion "controversy" up here in Canada too.
And here is my latest post at Abortion Gang.
What have you all been reading this week?
Posted by The Pedgehog at 10:16 AM No comments: