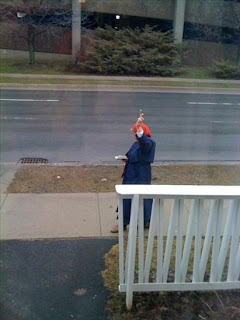 So as some of you may be aware, I'm moving away in August. I will no longer be working at the clinic, obvs. So I'm just kind of wondering what will happen in terms of my blog. I want to keep writing it, but I won't have the weekly updates on our neighbours to chronicle. The only alternative I can think of right now is to keep it as a blog about abortion in a more general sense, but the thing is there are already a lot of better blogs on the subject (including a couple that I already contribute to). So, we have a few months - if you have some awesome suggestions, I want to hear them!
Posted by The Pedgehog at 9:52 AM 5 comments:

The Predictable, and Otherwise

So this week, even though it was crappy rainy cold weather, the protesters were out bright and early with their signs. WHAT IS THEIR GAME??

Not much to report though. One of our volunteers almost tried to escort an 80-year-old woman into the clinic, to everyone's amusement (including, thankfully, the woman and her husband).

We had a couple no-shows. Note to people with appointments at our clinic (or similar): if you have decided not to come, no worries, but PLEASE CALL so we can give your appointment to someone else! There are usually women who would love to come a week earlier, and we could give them those time slots if we knew they were available.

So, you may have noticed that my post is up at Abortion Gang. I am very, very excited about Abortion Gang, you guys. Since I joined Twitter I have been noticing a very awesome international (but mostly North American) community of abortion providers, volunteers and activists and it excites me to no end that we are so connected. I mean, aside from being very passionate and good at their jobs, the people I'm meeting are also just genuinely nice. Making friends, woot woot! That is no small thing in this world.

And on another note, oh hey, remember that time Stephen Harper was all like, ladies of the world, I want to help you out! Well, he was lying. Or maybe he was telling the truth, but doesn't realize that contraception SURE AS HELL impacts maternal health, and the rest of the government is also too stupid to know this. And by "rest of the government", I mean the rest of the Conservatives and a bunch of Liberals, too. Sometimes I really despair of the whole process. Not that I thought any good could possibly come of this (it seemed quite clear from the start that Harper was only trying to distract from budget cuts to anything useful to Canadian women), but really: do these people even know any women? Do they know the basics of reproduction, pregnancy, childrearing?

If I had a bunch of money, I would send a copy of Michelle Goldberg's 'The Means of Reproduction' to every motherfucker who voted against this initiative. For real.
Posted by The Pedgehog at 1:06 PM 1 comment:

So at this week's clinic, the protesters did not show up until about an hour and a half into things. What are they playing at? I have learned through this YouTube clip that Pink Hat has to take her kid to school in the morning, so that's why she is late. But what excuse do the rest of them have? It has been beautiful outside, weather-wise. It makes me wonder if perhaps they are catching on to the fact that they are not saving any babies.

In terms of the above linked clip, I like Pink Hat's assertion that they are there because people don't know that there are options besides abortion. Which is kind of funny for the obvious reason that if you don't have an abortion, there is another pretty glaring option that happens; you don't even have to know about it (hint: birth). But really I found it interesting because she's basically saying that they are out there to promote their business (the Women's Care Centre next door), to let people know they have a counsellor (I think she even says certified counsellor*, and if she's talking about Crazy Legs, I would love to see that certificate, thanks). So how many other businesses can you think of that use PROTESTS to advertise? What kind of madness is this? Is having a sign and an ad in the phonebook the equivalent, to them, of parading in front of our clinic with graphic signs and Jesus on the cross?

A couple of the volunteers were telling me that last week, they saw an elderly couple leaving the hearing aid store across the lane. The woman urged her husband to stop the car next to them, and the escorts were a bit worried because sometimes they get yelled at by anti-choice members of the public. But the woman just wanted to tell them they were doing a great job, and give them a thumbs up. Yay for progressive old people!

I have linked a couple more blogs over the last couple weeks, in the "Pedgehog Reads" section of my sidebar. You should check them out. I will be contributing to one of them, Abortion Gang, in the next couple days. And I promise I will eventually be on I am Dr Tiller, as soon as I write it. Making myself write in progressively better weather is the hardest.

If you are in Fredericton, you should check out the 4th annual RAWA Benefit Variety Show (and silent auction!) this Saturday (March 20) at 7pm in the SUB Ballroom (UNB campus). Tickets are $10 or $7 for students, and are on sale at Westminster Books (on King Street) and at the SUB. There will be gumbooting!

*Edit: My bad, she says professional counsellor. And that could be anyone.
Posted by The Pedgehog at 12:51 PM 5 comments:

Taking My Boots Off

I know I've been AWOL. Partly that's because I was kind of transfixed by the gong show that was going on in the comments of my last post, but mostly because of another project I have going on. Some of you may know that I am in a feminist gumbooting troupe. We recently expanded the troupe (we actually doubled in size) and taught the new members how to gumboot, learned new moves, and choreographed an entire routine from the ground up in about six weeks. We had two gigs on Monday for International Women's Day, so in the last couple weeks I have been really preoccupied with that and haven't had a lot of time and energy even for normal things like doing the dishes, let alone blogging.

The gigs went well, but that's a story for another day.

Last week we didn't have a clinic, as it was March break and a lot of the staff was away (myself included - took a little trip with some friends to Halifax to see Wilco). This week the protesters were somewhat subdued. They came out pretty late in the morning and there were only three or four of them out there. Of course the escorts can't really afford to be complacent, especially when one of those protesters is Pink Hat. She wasn't too bad this week, but she was still out there, with her little Jesus on the cross and her scowl.

One of the escorts suggested that some of the protesters were giving up saving babies for Lent, and that's why they went so crazy around Mardi Gras. I kind of like that. The problem with the protesters is that we can only rarely estimate how they are going to behave; I can never give my volunteers a week off on the assumption that the protesters will not be there. Sometimes we'll go for weeks without seeing them and then all of a sudden there will be a swarm of twenty of them, or they will have invited some ridiculous group like Show the Truth or Bound4Life.

Anyway, spring is almost upon us.
Posted by The Pedgehog at 11:59 AM 12 comments: