Someone Notices a Problem


Check out this article on abortion access in Canada on VICE, of all places, with a nifty chart (below)! They're not totally clear on the New Brunswick situation in terms of hospital provision vs. clinic provision, and I wish they'd gone more in depth with additional barriers like race (particularly the challenges often faced by First Nations people trying to access abortion), but overall it's good the issue is getting this exposure. 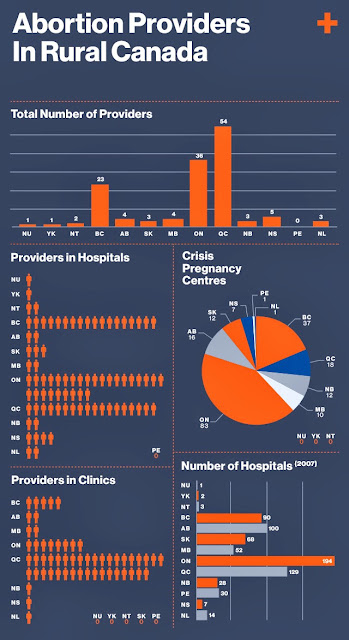 Posted by The Pedgehog at 7:23 AM No comments:

CCBR: Knights of the Patriarchy


The Canadian Centre for Bio-Ethical Reform (ie the charming folks behind the GAP project in Canada, and the recent anti-abortion recruitment at Toronto high schools) is at it again, this time distributing 100,000 postcard-style flyers in mailboxes in the Peel region. Guess what's on the flyers? If you said mushed up fetus pictures, you're only half right, because they also show a picture of the MP representing the riding in question.

I wonder if anyone has ever done a study on these exploded fetus pictures and how effective they are at changing people's minds about abortion. Most of the reaction to them that I've seen in the press and in person (stuff passersby have said when they see protesters holding the pictures at clinics) seem to indicate that even among self-identified "pro-life" people, the pictures are not a hit. People get upset about their kids having to see it, and I think people themselves don't want to look. The anti-choice crowd insist that this is what it's all about, that it's supposed to be disturbing and make you think about what "we" do to "babies," etc. But I have to think that the bottom line is, you're spending the money to get 100,000 of these things printed - what's the net benefit of that? Is it generating more ill will towards abortion than to your organization?

I used to believe the main problem with the exploded fetus images was that they were inaccurate - very few of them are actually sourced, they just say something on them like "abortion at 12 weeks" or whatever, while depicting a much later abortion, or a stillbirth, or an actual dead baby. I also think it's ridiculous to base an argument on grossing people out; I don't want to see pictures of knee surgery but I still think it should be available.

The main problem, however, is that the pictures don't tell the whole story, and that's deliberate. The "abortion" is decontextualized so as to appear as a monstruous thing, and to center the morality of the choice on the fetus. But where is the person whose choice it (supposedly) is? These pictures purposely detach the issue from women's autonomy and rights in order to make us not only forget that the issue is more complex than murder/not murder, but also to dehumanize women who choose abortion.

There is nothing that convinces me that the pro-life movement will happily throw women under the bus than these pictures. In fact, I think it's more than a happy side-effect for them; they want sexually active women to be demonized for their choices. Being actively anti-abortion is to support this tired but incredibly effective form of social control: keeping women in their place.
Posted by The Pedgehog at 8:20 AM No comments: