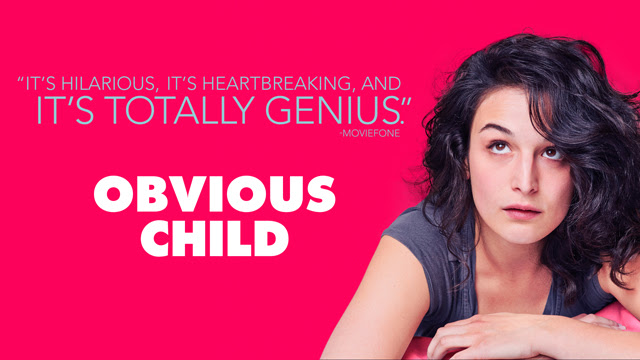 Ok so I saw 'Obvious Child' last night, and I adored it, and I'm not just saying that because it's an "abortion movie".

You may have heard a little about this film - I actually remember seeing the short film version online a couple years ago - basically it is the story of Donna, who is in a really shitty place in her life, hooking up with a dude, getting pregnant, and deciding to have an abortion. I know it doesn't sound like super feel good rom-com material, but hear me out.

Donna is a stand-up comedian at a rough bar in Brooklyn (this is not her day job). When we first meet her she is doing a pretty funny bit about underwear stains that was TOO REAL. Shortly afterwards her boyfriend dumps her (in the bathroom!!) and shortly after that, she finds out the bookstore she works at is closing, and she will soon be out of a job. The breakup is clearly the hardest on her heart, but it's all kind of a terrible spiral. Fortunately she has a great (and predictably quirky) support network - her divorced parents, feminist roommate, gay bestie, etc.

Donna meets Max, who is totally square. They have a fun and hilarious night together. They are very drunk and may or may not have correctly used a condom. Donna finds out she is pregnant, immediately decides to have an abortion, goes to Planned Parenthood (realest scene in the movie) and continues to spiral into awfulness thanks to her impending unemployment and the $500 cost of the abortion - which she has scheduled for Valentine's Day.

You have to watch the movie, it is just so lovely. There were definitely some rom-com staples (aforementioned gay bestie comes to mind, although totally worth it for his line about getting a guy's mouth pregnant), and everyone was pretty white, and there were too many fart jokes for my personal taste. But those were seriously the only criticisms I had.

What I love most about the movie is that it isn't really about the abortion (or the pregnancy) at all - even the scenes that are about it. It's about Donna. It's about her life and her friends and the circumstances around the abortion, but this movie doesn't feel the need to spend any time on the actual decision-making process, and that's awesome. It makes sense that this character would make this choice. It is consistent with who she is, that she would not agonize over maybe having the baby.

Some viewers might find some of it preachy - the roommate does use the word "patriarchy" at one point, and the mother's confession is a little convenient - but overall I think that even if you don't give a shit about abortion, you will probably enjoy this movie. Jenny Slate is extremely likeable and creates a Donna that we can get behind.

The scene where she talks about her abortion in her stand-up is the bravest shit I have seen in a movie in a long time, maybe ever. My heart, you guys! I cried and cried. Please see this movie.

If you're in Toronto, it's playing at the Cineplex at the Manulife Centre (at Bay and Bloor). Otherwise I guess check your local listings.

Posted by The Pedgehog at 10:36 PM No comments: