It's blog for choice day!

Of course, I'm always blogging for choice here, but in honour of the day (and because nothing much happened at the clinic, except that it was FREEZING), I thought I'd write a bit about something very inspiring I witnessed this past weekend.

It had come to my attention that the Bound4Life people would be standing outside the clinic on Saturday morning. I thought that if I could get enough people to equal their numbers (only about nine or ten), we could stand across from them with tape over our wombs that said "mine". A few of my escorts were up for it, so we arranged to meet at the clinic a half an hour before the life people were expected to arrive.

People started to trickle in, and I began to realize that I had WAY more than nine or ten choicers. By the time zero hour rolled around, there were twenty-five plus people packed into the clinic waiting room, taping their stomachs and making signs. When we marched outside with our tape, signs, and dog (!), the lifers were absolutely flabbergasted. You could tell that not only had they not expected resistance, they had no idea we could get so many people to oppose them.

We spent the morning standing across from them, singing, chanting, and generally making merry. It was less a counter-protest and more a celebration of the legality of choice, made all the more relevant because of the approaching anniversary of the Morgentaler decision. People met each other, mingled, talked and laughed. There was no media, no plan, just twenty-five young people standing in the cold, celebrating our right to choose in the face of a silent but sinister opposition. Especially notable was the number of young men we had with us. It was good to see. 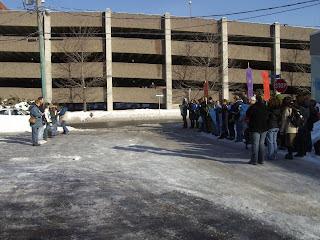 As someone who has made a transition over the last couple years from vocal protester to organizer, I was inspired to see so many people of my generation willing to stand up for something so important. There was no need to outlast the protesters, or out-argue them; we only needed to show them that we were there. They need to know that when they come to judge the decisions that women make, to imply through their actions that women who choose abortions are murderers, and to impose their morality on others, that we will not sit back and watch them through the blinds of the waiting room. We will stand up and fight back. Every time.

I hope I haven't bored you all with the less than funny post. :) Because it's blog for choice day, I also wanted to just include a little bit about what choice means to me, and why it's important. This is actually an exerpt from my essay "Why a Pro-Choice Canada is Important", which I wrote for the Canadians for Choice contest (that I won!). So here it is: 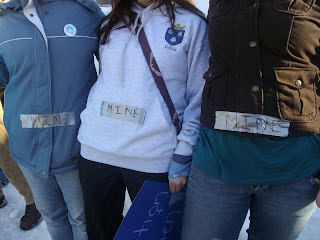 I love, LOVE, the photo!

Great entry, but you should know that when you make "eat a sandwich" an option in the poll, I'll choose it every time, even if it doesn't rhyme...or reflect my actual views.

Way to essay though! And kudos to those who attended the counter-protest. Way to stand up and support choice.

Is the rest of your essay up online anywhere?

I'm proud of you

Congratulations to all the pro-choicers who showed their strength on Saturday!

I was just wondering if you knew that the first blog linked to on the left side of your blog (under the blogging alliance of non partisan canadians) the "101 people who are screwing up Canada"... that blogger sites Dr. Henry Morgentaler as the #1 person who is screwing up our country... (#2 as David Suzuki)... disturbing, yes?

I don't know if you are aware, so I thought I would let you know so you could remove the link if you wanted... plus the blogger just sounds like a real ass..

Thank you! For the post, for the photos. You are truly on the front line.

I firmly believe that Choice goes beyond the "choice" to have an abortion, and as someone utilizing a less than traditional assisted reproduction method, I fear that when there are attacks on abortion and the right to choose, my right to control my own reproduction is also in danger.

Terri - nope, it isn't. I haven't posted it in full yet because I'm not sure what the copyright situation is...I can email it to you if you want to read it, though.

Chrrris - yep, but it's a blogroll, so I can't really control who is on it. Actually Spinks (the blogger who did the 101 Canadians) has a pretty decent political blog; I hardly ever agree with him (he is right wing), but I like to read it. Sort of a "know thy enemy" type of thing.

I love you. Is it cool if I post some of your post on my blog? I'm planning something for the Canadian version of blog for choice day, but I think the quote from your essay sums up some of the ideas I want to convey in a different way than I intend to write about. I'll let you know when I've got something of note up, just want your ok first. Happy Birthday to me, and Roe v. Wade!

There's a Canadian blog for choice day?? I had no idea!

And yes, feel free to quote whatever you'd like, as long as it's credited (you can just credit "the pedgehog").

hey great post! I found your link on a facebook group and have been sort of perusing your entries....

I lived in Fredericton for three years and I can honestly say that I've rarely heard the Morgentaler clinic mentioned until I walked by it one day.