Hey, so remember that documentary I was talking about - the one I'm in? Well, they have announced the Canadian premiere, which will take place at the Whistler Film Festival in BC on November 29th, 2012 (next Thursday!). 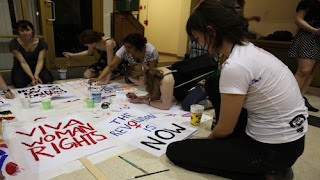 If you're in the area I highly recommend checking it out. The film is called Status Quo? - the unfinished business of Feminism in Canada and it's a really innovative and very nitty-gritty look at contemporary feminism, including topics like missing and murdered Aboriginal women and immigrant childcare workers that are often left out of mainstream and second wave-centric evaluations of "where we are now" in the movement. You guys, it made my heart burst out of my chest. There are some really amazing and inspiring people in the film that you will want to listen to all day and then maybe hug.

If you're not in Whistler, please look out for the film in your area (it will most likely be played widely as part of International Women's Day in March). I will keep you abreast of details, of course, particularly any screenings in Toronto or the Maritimes. It's not only a great film, but a perfect way to support young female filmmakers and feminist women of colour.