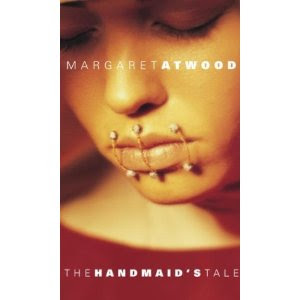 So. I realize I am about twenty-five years too late on this review. However, I actually think this book might be more relevant now than it was when it was written, which is a mark of success, however bittersweet, for the author of a dystopian novel. And for my money, Atwood is the master of dystopia - I honestly think she is some kind of strange prophet or soothsayer. This shit is terrifying, and it’s terrifying because it is so real.

First let me say it does damage my Canadian feminist cred a bit to have not read this book until now, but hey, we all have flaws. I feel like coming to it later in my feminism is maybe a bad choice; I still loved it, but there were a lot of revelations and ideas that would have been revolutionary to me about five years ago. Stuff I had to find out on my own, without Atwood. That is sad, because I think I would always rather learn through Atwood.

For those unfamiliar with the plot, it is set in the not-so-distant future in the Republic of Gilead (formerly the USA). It is a theocracy of sorts, where women have narrowly defined roles and are marked by different coloured clothing. The story is told from the point of view of Offred, a handmaid, whose purpose is to produce children for a rich man and his wife. This new society is in its infancy and Offred (and the people in her life) can remember what it was like before.

Atwood apparently based the society (in part) on Iran, but there is nothing in the book that hasn’t happened somewhere, at some point. Her descriptions of the transition are particularly chilling because they are so believable. Looking at the politics in the USA right now (and to a lesser extent, Canada), yeah, the ideas are there. Thank goodness for the progressive voices speaking up. But when the narrator describes executed political prisoners hanging in public with signs denoting them as abortion providers, or “gender traitors”, it does not seem so far from our own world - the only difference is in our real life, it’s the citizens who do the killing; the government only offers politically expedient disapproval (depending on the government!).

I could take every single thing from the book and show a parallel with our current society, but that sounds painful. Instead I will just highly recommend that you read it - or if it’s been a long time since you’ve read it, give it another look. I think you’ll be surprised/horrified at how much more real it has become.

Also, I really want a “nolite te bastardes carborundorum” tattoo.
Posted by The Pedgehog at 11:52 AM

I read the book when it first came out and it was very relevant then and now even more so.....it is a good and timely read, i suggest everyone read it.